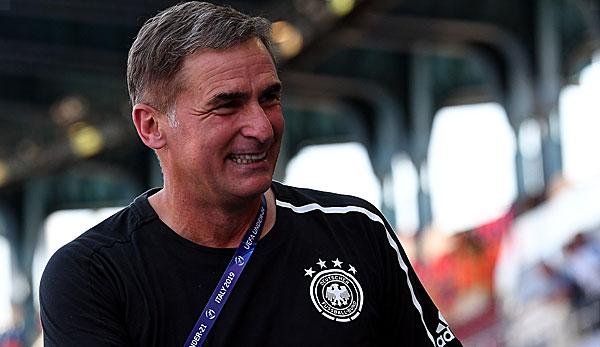 His commitment was viewed very critically in 2016, now Stefan Kuntz with the U21 is about to reach his second European Championship final (Germany vs. Spain, 20.45 in the LIVETICKER) – and is recommended for more.

When Nadiem Amiri sunk the decisive free-kick against Romania 4-2 in the net on Thursday evening, the U21 national team broke all the barriers. The goal scorer sprinted to the German bench and was covered by a cheering grape from his teammates. Also coach Stefan Kuntz was right in the middle and didn’t even know what to do with his emotions. He turned in a circle, tore his arms into the sky and jumped towards his co-trainer Antonio Di Salvo.

And when the referee finished the game a few moments later, the coach became sentimental. With glass eyes he loved everyone who came towards him. Because he had made it again – for the second time in a row his U21 is in the final of the European Championship.

A fact nobody would have expected when he was presented in September 2016 – probably not even he himself. Because the successor of U21 trainer legend Horst Hrubesch was actually someone else planned: Marcus Sorg. The former SSV Ulm professional, however, opted for the co-coach job in the senior national team. At the time, Kunz was merely presented as a kind of temporary solution.

Kuntz’s commitment was viewed critically, especially in public, as his previous career as a coach was not exactly crowned with success. After he had gained experience at his home club Borussia Neunkirchen in 1999, he coached the Karlsruher SC, Waldhof Mannheim and LR Ahlen – he could not show more than the 2nd Bundesliga.

In 2003 he even moved from the coach’s bench to the management of the 1st FC Kaiserslautern, the club where he had also experienced his best years as an active player. He shot 75 of his 179 Bundesliga goals for the Red Devils, so that he returned to Lautern with great advance praise. After a promising start, he reached his limits at Betzenberg and was jointly responsible for the large mountain of debt that had accumulated at the traditional club.

Although the FCK was promoted to the Bundesliga with Kuntz in a leading position in 2010 and managed to maintain their class in the following year, the downward trend took its course in Kaiserslautern when they returned to second place in 2012. After three narrowly missed ascents, the then managing director missed out on thinning out the expensive squad, made bad transfer decisions and lived with the club above his own means – licensing problems and sales of promising players were the result. The result of the former favourite of the public in 2016.

Irrespective of the failure of the Red Devils in sports, it was already apparent at that time that Kuntz attached great importance to youth work and above all had his strengths in communication. The 1996 European Champion was also jointly responsible for Willi Orban, Kevin Trapp and Dominik Heintz making the leap into the Bundesliga – but the three left Betzenberg early due to financial problems, too.

This ability to work with young players was apparently not hidden from the DFB either, and the decision to promote Kuntz to U21 coach proved to be the right one – not only because of the second final in a row. Despite his 56 years, Kuntz is regarded as a type who understands the youth and is very well received by the team.

“Ste-fan Kuntz, and Ste-fan Kuntz – we love you,” Benjamin Henrichs sang through the U21 team bus, for example, when the team was able to make it to the semi-finals of the European Championship by drawing against Austria. This “love” does not come by chance and is by no means a matter of course, because the coach knows exactly how to touch the team.

No matter who you approach Kuntz these days in Fagagna, Italy, nobody would even think of saying anything negative about the coach, who always convinces the public with his mixture of openness and authority. “Stefan is a good guy and lets his experience, which he gained as a professional, flow in very well. He knows exactly how to deal with his team,” confirms Meikel Schönweitz, who as head coach of the German U national teams knows all about the 56 year old’s work.

For Schönweitz, Kuntz and his co-trainers Antonio Di Salvo and Daniel Niedzkowski have meanwhile even become a prime example at the DFB. As part of the restructuring of the DFB, one of the association’s goals is to combine an age specialist (Di Salvo) with an innovative (Niedzkowski) and an experienced trainer (Kuntz) in the youth teams: “The best example of this concept is the U21, which we are orienting ourselves towards to a certain extent.

In the same way, Oliver Bieroff recently praised the team of coaches around Kuntz and stressed that they want to plan long-term with the current U21 coach. “We definitely don’t want to give up Stefan,” the manager of the national team made clear at the same time, because his contract only runs until 2020.

What happens afterwards is still open at the moment. While Schönweitz assumes that Kuntz will not miss the Olympic Games in Tokyo next year, it is even suspected that Kuntz could follow national coach Joachim Löw in the A-Team. “Those who can lead the U21 to the title have what it takes for more,” Henrichs could also imagine his current coach with the big boys.

Kuntz himself doesn’t want to comment on possible speculations – especially not now that the European Championship final against Spain is on the agenda – his second in a row. Not a bad record for someone labeled a makeshift.

Amiri: In the “Russenhocke” to the EM hero
Joachim Löw praises European Under-21 vice-champion: “They gave off a great business card”.
We use cookies to ensure that we give you the best experience on our website. If you continue to use this site we will assume that you are happy with it.Ok