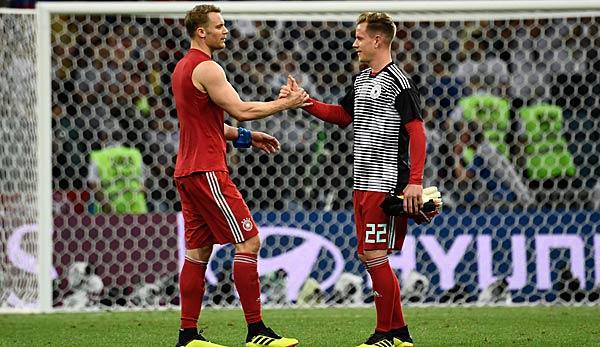 Manuel Neuer’s appearance in the cup final is still open, Marc-Andre ter Stegen is injured at his knee: Before his squad is nominated for the upcoming European Championship qualifiers, national coach Joachim Löw is facing a goalkeeper problem.

Manuel Neuer continues to work special shifts for his comeback. The use of the goalkeeper of the German record champion Bayern Munich in the final of the DFB Cup on Saturday (20.00 h/ARD and Sky) in Berlin against RB Leipzig is a race against time. If Neuer doesn’t get fit after his muscle fibre rupture in the calf in mid-April, Joachim Löw also has a problem. Neuers deputy Marc-Andre ter Stegen injured his knee last week in FC Barcelona training. The downtime? Open.

On Wednesday, Löw nominates his squad for the European Championship qualifiers on 8 June in Belarus and three days later against Estonia in Mainz. Kevin Trapp is ready to replace Neuer and ter Stegen. The 28-year-old was already the third goalkeeper in the 2018 World Cup debacle in Russia, and Trapp was also in the squad at the start of the international year in March.

Last season Trapp was lent to Eintracht Frankfurt by Paris St. Germain and his parades played a big part in the semi-final entry of the Hessen in the Europa League. But his future is open. According to Bild-Zeitung, his advisor currently offers the goalkeeper to many clubs.

In addition to Tah and Klostermann, Leroy Sane, Timo Werner, Kai Havertz, Julian Brandt and Thilo Kehrer are also eligible for the U21. However, they are regarded as fixed sizes by Löw.

The question of whether Löw will bring the World Cup hero Mario Götze back to the DFB selection after his good form in the second half of the season is exciting. For Stefan Effenberg the matter is clear. “He was one of the main reasons why Borussia Dortmund kept the fight for the championship open until the end. He has learned, worked for the team and consistently performed very well. Löw can no longer get past Götze,” wrote the ex-national player in his column at t-online.de.

Löw will assemble his squad for the compulsory tasks in Belarus and against Estonia on 2 June in Venlo, the Netherlands. Two days before departure to Minsk, a public training match will take place in Aachen on 5 June.

“It’s nice to meet our fans again in this form. We are especially looking forward to many families and children, who always create a special atmosphere”, said National Team Director Oliver Bierhoff and added: “With the day in Aachen we also want to prepare ourselves positively for the two important qualifying matches that we want to win”.

I was sadder than ever at the World Cup
Not fan-close: Vogts attacks DFB