Amiri: In the “Russenhocke” to the EM hero 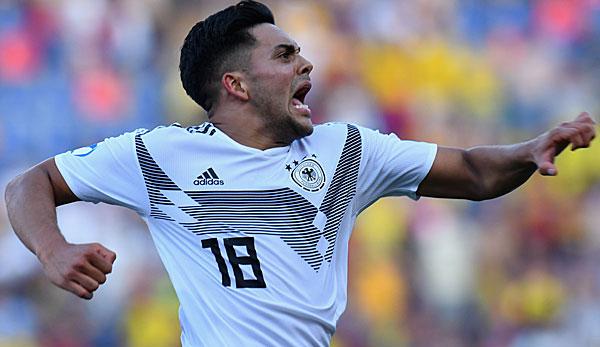 With two goals Nadiem Amiri was the match winner for the U21 in the European Championship semi-final against Romania (4:2). He brought the subculture Gopnik to Bologna by “Russenhocke”.

Loitering around in brand training suits, drinking alcohol on the street, passers-by passing by and clichéd sitting in a squat. If you believe Wikipedia and questionable rap songs, these things characterize the Russian subculture Gopnik.

In Russian jargon, Gopnik “belongs above all to representatives of the criminal youth, who often have no education and generally belong to weaker economic strata,” it says. The characteristic or symbol of this subculture is the so-called “Russian squat”, in which it is particularly important that the heels remain on the ground.

On Thursday evening in Bologna, Italy, you could marvel at how this Russian squat works. More precisely, in the venerable Stadio Renato Dall’Ara. There the German U21 national player Nadiem Amiri squatted on the grass at 18.21 o’clock and did not get the grin out of his face.

In the semi-finals of the U21 European Championship against Romania, he had just taken the German team into the lead with a great goal. In his own half, he set off in this scene, dribbled deep into the opponent’s third, let an opponent out and heaved the ball through the legs of Alexandru Pascanu to 1-0 lead into the net. And then the 22-year-old squatted and looked towards the many Romanian fans in the stands.

“That was the Russian squat,” Amiri explained after the final whistle and when he realized that most journalists could not do much with this term, he added: “Because of Waldemar Anton, who is half-Russian. We agreed I’d be so juble when I hit it.” And so Gopnik had arrived in Bologna.

But although Amiri brought the Russian subculture onto the Italian lawn this evening, the young Hoffenheimer would probably be the last to be assigned to Gopnik. For instead of appearing proletarian and pompous, the Ludwigshafen-born artist seems rather shy and reserved. In interviews, the midfielder speaks very quietly and is always polite. Even on the pitch, he is not exactly one of those players known for emotional speeches.

Instead of emotional words, Amiri convinced with emotional goals in his victory against Romania. After scoring his first goal to 1-0, he added in injury time and scored the final score of 4:2. “I was actually dead, but after the goal I had a lot of strength again through the emotions,” he described his emotional state after the final whistle.

A month ago, his chances of participating in the European Championship were dead – or at least almost dead – as the Hoffenheim player suffered a ligament rupture on the penultimate Bundesliga matchday. Although he had not yet fully recovered, coach Stefan Kuntz nominated him for the tournament in Italy.

As Amiri revealed, the plan was to get back to 100 percent in time for the knockout matches: “Our plan was to get me completely fit during the group phase and then be fully there in the semi-finals – that worked well,” he said.

Because beside his double pack Amiri convinced on the left side with clever runs and numerous good ideas. He shot at the goal five times, five more times he played his colleague. “He has done us very well today,” Captain Jonathan Tah also made clear.

“That was very emotional today,” Amiri admitted after his gala appearance and already focused on the task ahead: “Now it’s time to regenerate and take the momentum with you.”

For the midfielder in the final against Spain, it’s about showing the same “strength of character, mentality and emotion” as in previous games: “We can enjoy the moment today, but we’ll have to knock everything out for the last time in the final.”

And maybe we’ll see Amiri again on Sunday in the “Russenhocke” – only then with the European Cup in his hand.

Kuntz probably renounces “espionage” after breakdown
U21 trainer Stefan Kuntz: From interim solution to DFB showcase model
We use cookies to ensure that we give you the best experience on our website. If you continue to use this site we will assume that you are happy with it.Ok