Joachim Löw praises European Under-21 vice-champion: “They gave off a great business card”. 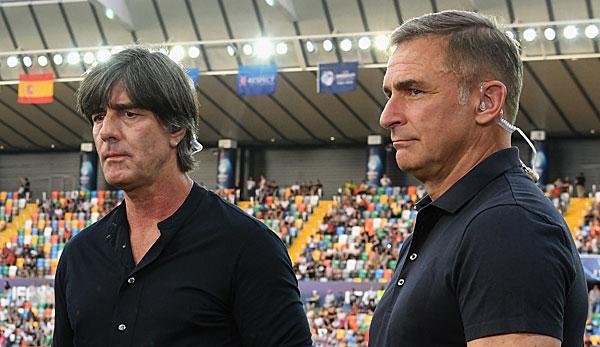 Despite the narrow 1:2 final defeat against Spain, Joachim Löw is raving about the performance of the German U21 national team at the European Championships in Italy. Especially the shown values like order, discipline and joy of playing made the national coach happy.

“Even though it wasn’t enough for the title in the end, the team played a great tournament and left a very good visiting card,” said the 59-year-old after the final whistle in Udine, Italy. “Our team showed a good performance against strong Spaniards and fought until the end.

Manager Oliver Bierhoff sees it similarly and thinks that the U21 can be “really proud” of what they have achieved: “The performances of the U21 and also of the women have done Germany a lot of good, because they have conveyed the joy of playing and the desire for the national team.

“Some players had the chance to present themselves on the international stage and used this opportunity,” Bierhoff continued. Luca Waldschmidt, who was the best scorer of the European Championship with seven goals in the tournament, stood out.

For Löw, U21 coach Stefan Kuntz also “did a great job”, because the 1996 European champion always managed to convince with his interpersonal skills. “He has a very good speech and a very good relationship with the players.”

U21 trainer Stefan Kuntz: From interim solution to DFB showcase model
DFB-Team: Löw names two possible successors
We use cookies to ensure that we give you the best experience on our website. If you continue to use this site we will assume that you are happy with it.Ok