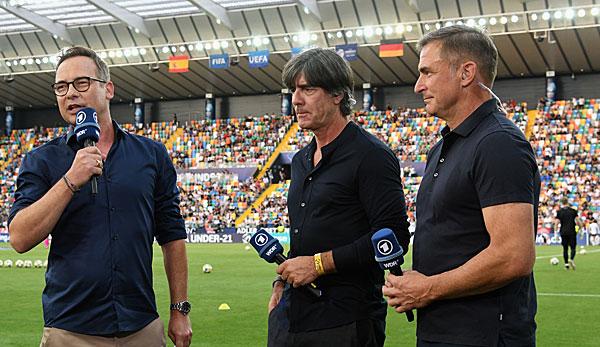 Joachim Löw brought U21 coach Stefan Kuntz and his assistant Marcus Sorg into conversation as his possible successors. We have two coaches at the DFB who are absolutely capable of becoming national coaches: Stefan Kuntz and Marcus Sorg,” he told the Bild newspaper.

Löw’s contract with the DFB runs until the 2022 World Cup in Qatar. “Both have a lot of empathy, which is important for the young players today, that you get access to them and reach them on a personal track. Both can do that very well,” Löw praised his two potential heirs.

Kuntz (56) blocked questions on the subject at the U21 European Championships, where he and his team lost the final against Spain (1:2), as “disrespectful” towards Löw. Sorg (53) stressed at the European Championship qualifiers in Belarus and against Estonia in June, when he represented Löw, that he was not looking for Löw’s job.

“Yes, but of course, absolutely,” Löw said when asked whether he trusted Kuntz for the position: “Stefan has done an excellent job during the years he has been with the DFB. He has a very good address to the team, he has a lot of empathy, he has reached the final twice. We always have a close coordination – the players who come up are very well prepared.” Sorg recently represented him well, Löw added, “he has also been with the DFB for a long time, and he also has a high level of expertise.

Must Kuntz and Sorg fight out the succession among themselves? Löw answered the question with a smile: “That’s not my decision in the end – they both have great abilities.” DFB Director Oliver Bierhoff added: “We can see that we have good coaches in our own ranks. Marcus Sorg was an excellent replacement for Löw when he was ill. Stefan Kuntz has international experience. I’m not worried about the emergency right now.”

Joachim Löw praises European Under-21 vice-champion: “They gave off a great business card”.
Future at U21: Kuntz avoids confession
We use cookies to ensure that we give you the best experience on our website. If you continue to use this site we will assume that you are happy with it.Ok