The DFB broke these records against Estonia 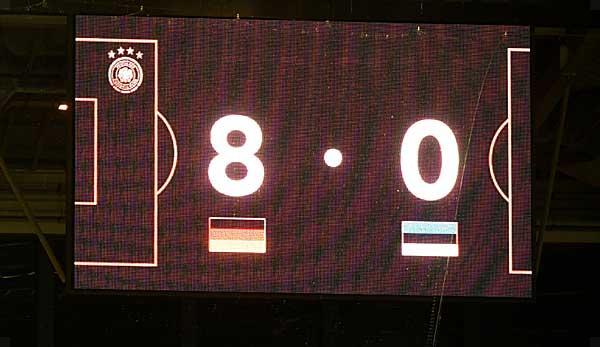 Numerous DFB records have fallen in the 8-0 cantonal victory of the German national team in the European Championship qualification against Estonia. On the one hand, two historical series continue. On the other hand, two DFB players were able to enjoy their individual best performances.

Never before since data collection began has a national team player had as many ball actions as Joshua Kimmich had against Etsland (176) on Tuesday evening. In addition, Manuel Neuer is now the national goalkeeper with the most Zu-Null matches in the history of the DFB.

Neuer kept his box clean 37 times in his 88 international games, overtaking Sepp Maier (36 to zero games). The 1003 passes the DFB team played against Estonia were also the highest score in a German international since data collection began.

The DFB selection has been unbeaten in Germany for 30 compulsory matches – another current record for the German Football Association. The last defeat in Germany was conceded by the national team on 17 October 2007 in a 3-0 draw against the Czech Republic. At that time, however, the DFB selection had already qualified for the 2008 European Championships in Austria.

In addition, the DFB’s historic winning streak in World Cup and European Championship qualifiers continues: The 8-0 win against Estonia was not only the highest home win in the era of national coach Joachim Löw, but also the 14th victory in qualifying for a major tournament in a row. The series began on 11 October 2015 with a victory over Georgia in the final qualifying game for the 2016 European Championship finals in France.

On their way to the 2018 World Cup in Russia, the DFB team subsequently won all ten qualifying matches, but experienced a historic preliminary round out in the final round. After their third victory in the third qualifying game for the European Championship 2020, Germany are only second in Group C behind Northern Ireland, which already has one more game to play.

On 6 September, the DFB selection will continue in the European Championship qualification with the top match against the Netherlands. Three days later the first meeting with Northern Ireland follows.

Bierhoff: Sane would do “good” for the Bundesliga
Take care: “I am not a national coach”
We use cookies to ensure that we give you the best experience on our website. If you continue to use this site we will assume that you are happy with it.Ok