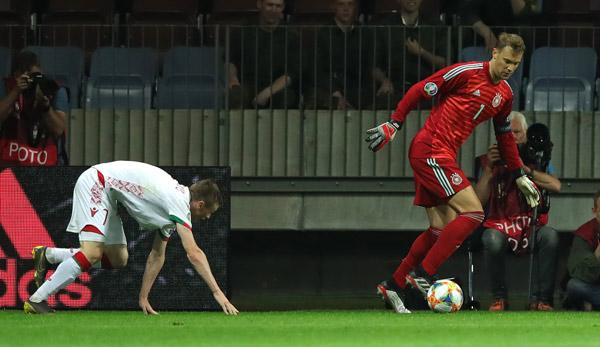 Boredom – or just unbelievable coolness? “Schnickser” Manuel Neuer has inspired his fellow players and amazed the bosses with his casual dribbling of Borissow.

“I was thinking, he probably got a little bored. That was quite brave at the score,” said DFB Director Oliver Bierhoff about the captain’s daring trickery in the 32nd minute of the European Championship qualifying game in Belarus (2:0 – click here for analysis).

When the newcomer, who was running out of his penalty area, danced out the opposing striker Yuri Kovalev twice at the goal line, it was only 1-0. “I didn’t want to dribble, but I didn’t have a direct play,” Neuer said, “so I replayed. The second time there was still nobody there, it just happened, it was nothing planned.” But skillfully.

The fans, including the Belarusian fans, reacted with applause as did their colleagues. “He could also play with us on the Six or a little further ahead, as creatively as he was knitting around back there,” said Joshua Kimmich: “You can see that he has self-confidence and the desire to play. It’s very good for us as a team.”

The fact that Neuer (33) would have also become a good field player is not a new insight, but his technical abilities surprise again and again. “I’ve learned a lot from my fellow players in the past, you can learn something from that,” said the Munich player.

Neuer, stressed Bierhoff, could “assess such situations well – and of course it was a great action for him”. The goalkeeper “always likes to play and is happy when he has a little action.” Like the 30th minute he was doing his real job at Nikita Naumov’s header: Hold balls. Also this in outstanding manner. “You’ve seen: He’s ready,” Bierhoff said about the number one.

Lion without worry: DFB eleven wins confidently in Belarus
Sane keeps silent – Kimmich: “I would buy this”
We use cookies to ensure that we give you the best experience on our website. If you continue to use this site we will assume that you are happy with it.Ok