DFB-Team: Voices: “I’m a bit older than that” 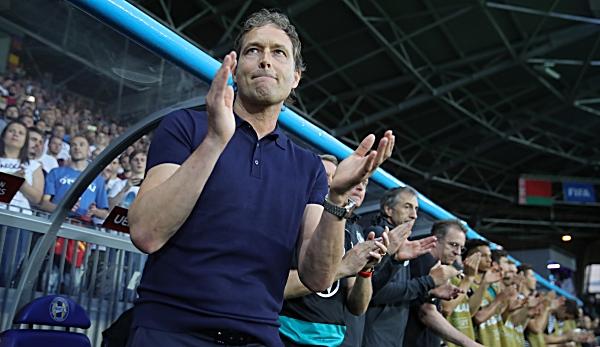 After the 2-0 victory of the German national team in Belarus, Ilkay Gündogan praised Manuel Neuer, who showed a brilliant parade shortly before halftime. Intermims national coach Marcus Sorg is happy about the overcome resistance.

SOCCERSCORE combines the voices of RTL and Mixed Zone.

Marcus Sorg (co-trainer): “Victory is above all. It has been seen that we had to overcome some resistance against a very low standing opponent. We played great at times, but by and large that was absolutely okay. It was important for us to overcome these resistances. A victory like that will get any team ahead. Above all, a team like us that is under development. It was a remarkable achievement.”

…about Marco Reus, the scorer for the 2-0: “Marco is in very good shape. Very light-footed, very enthusiastic to play – a very great player.”

…about the responsibility he was given on the sidelines in the absence of Joachim Löw: “It was a bit unusual, but everything was green. We’ll be happy when the jogi is ready again.”

…about the renunciation of Timo Werner: “That’s just sometimes the case. For various sporting reasons, we made this decision today.”

Marco Reus: “We had to show a lot of joy in playing. As expected, they stood very low. We didn’t succeed in everything, but we controlled the game. Now we have to play better and more concentrated against Estonia on Tuesday to maybe score more goals.”

Ilkay Gündogan: “We started very well, let the ball run very well and used the rooms a lot, so we deservedly scored 1-0. Manu had to save us at a corner or two. We knew we could count on him. The 2-0 helped our game. After a two-week break that was very serious today and in the end a highly deserved victory.”

…about Marcus Sorg: “Very good speeches. He did a great job. You can count on him. He makes it very sympathetic, in a different way like Jogi. He hired us very well. We are very satisfied.”

…about his physical problems in the second run: “I am a bit older. (laughs) No, I noticed the adductors and then after the 2:0 relatively quickly indicated that I prefer not to take any risks. Now the muscle’s a little closed, but all’s well. I’m satisfied.”

Manuel Neuer: “We are satisfied, have completed our task. I’d give the team a score of 2 to 3. It’s always difficult against low opponents, but we also missed a few chances. We want to make this better again on Tuesday.”

Kimmich: “Quality is available with us”
Lion without worry: DFB eleven wins confidently in Belarus
We use cookies to ensure that we give you the best experience on our website. If you continue to use this site we will assume that you are happy with it.Ok