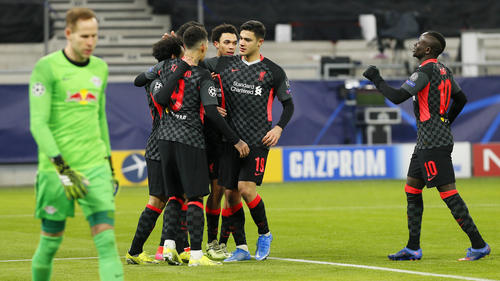 = = = Liverpool = = = The Saxons lost to Liverpool in the Champions League, losing 0-2 (0-0) to Liverpool. At their goals, the star attackers Mohamed Salah (53rd) and Sadio Mané (58th) used Leipzig mistakes that should not happen at this level. The English champion now has the clear advantage for the second leg on March 10th. However, it is still unclear whether the match can take place at the Anfield Road stadium due to coronary restrictions.”In the first half it was relatively balanced. Liverpool didn’t have many situations. In the second half we actually made a great game, but two sharp mistakes. They will be punished at this level. I think it’s much worse that we don’t take advantage of the opportunities. We have to tackle this more than the mistakes. I don’t think we were any worse, “Nagelsmann said, and Marcel Sabitzer added,” The disappointment is already great. Starting in the second half with two such mistakes is annoying. I still think we still have a few chances for the second leg.”

On the other hand, the new live pool player Ozan Kabak was highly satisfied:” We played very well and deserved the victory. We’ve all won midfield tackles. I enjoy playing with Mo Salah and Sadio Mané. They’re real stars. We will also win the second game and enter the quarter-finals.”The RB officials made an honest effort to create a certain home game atmosphere in the Puskas Arena. According to UEFA guidelines, their own stadium spokesman had arrived and the flags of the fan clubs were hung up in the empty arena. This obviously inspired the team, because already in the fifth minute only the post prevented the lead by a header by Dani Olmo.

Together with Christopher Nkunku, the Spanish international was supposed to deal with Liverpool’s defence, while Nagelsmann did without a real forward. Despite the good initial phase, nervousness quickly spread at Leipzig, especially from the trio around the initially weak Dayot Upamecano, all sorts of misses were produced in the build-up of the game.