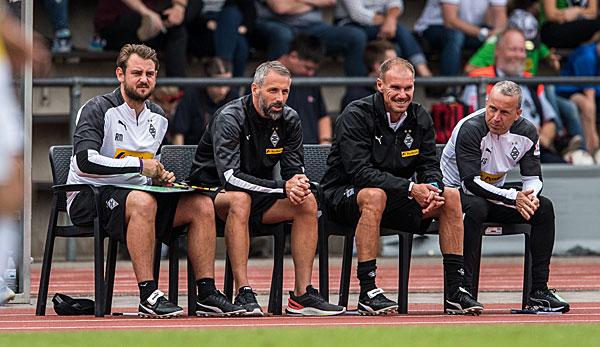 New coach Marco Rose is undergoing a tactical revolution at Borussia Mönchengladbach. Perhaps it is the most exciting project in the Bundesliga.

“It’s all new, of course,” Gladbach’s Patrick Herrmann tells SOCCERSCORE and Goal, and he says it as if it were the most natural thing ever. But well, “everything new” is also the current motto at Borussia Mönchengladbach. Since Marco Rose took over the coaching position a good two weeks ago, perhaps the most exciting project of the Bundesliga has been running: the total change in the game philosophy and tactics of a football team.

Dieter Hecking, most recently Gladbach trainer for two and a half years, had a 4-3-3 system played last season and attached importance to game control. When his team held the ball over 62 stations against FC Schalke 04 in February and then shot it into the goal, he praised it afterwards: “It may have been unspectacular, but from the coach’s point of view it was an outstanding goal.

About two months later Gladbach announced the separation from Hecking in summer, finishing fifth in the standings. Soon afterwards Rose was introduced as his successor. From his point of view, this goal against Schalke was probably not an outstanding goal. For Rose, an outstanding goal is one that is preceded by about zero to three stations.

Rose, unlike Hecking, is an anti-ball trainer, not a with-the-ball trainer. He wears a grey beard instead of pointed eyebrows and stands for counter-pressing and speed football instead of ball control. So Rose let Salzburg play very successfully at his so far only professional coach station RB Salzburg and so he will also play in Gladbach.

“We want to be very active against the ball, sprint a lot. We want to win high balls and have short ways to the goal. We don’t want to play high and wide, but fast, dynamic and actively forward,” he said at his presentation. Rose wants a lot, but he knows it himself. “This all sounds really awesome, but it’s gonna take time to develop these things.”

Rose and his team have been working on this development for two weeks, and he has about a month until the start of the season. So far Gladbach has played three test matches under Rose. An 8:0 victory against the national league team 1. FC Mönchengladbach was followed by a 1:0 victory against TSV 1860 Munich and a 0:1 defeat against FC Augsburg (each 45 minutes playing time) at a preparation tournament in Heimstetten near Munich on Saturday.

The only two newcomers to date, Breel Embolo (for ten million euros from Schalke) and Stefan Lainer (for twelve million euros from Salzburg), were injured at the tournament in Heimstetten. And so it was only old players who had to fill the new game philosophy with life.

“Under the old coach it was important to hold the ball and move it”, says Herrmann, before he quickly enumerates: “Now we want to go quickly into counter-pressing, retrieve lost balls quickly, then go quickly into the depths and play speed soccer with many fast runs”. Hurry! The main thing is fast!

As in Salzburg, Rose is also building in Gladbach on a 4-4-2 system with rhombus. “Tony Jantschke tells SOCCERSCORE and Goal that we’re rehearsing, and he provides us with his first insights: “This way we have one more man in the centre and faster people in the box. But the ways to the outside are further.”

Because the outer lanes are occupied only by the two outer defenders, there are no classic wing strikers in this system, unlike in the last 4-3-3 practiced. There is therefore no need for a direct replacement for the Thorgan Hazard that migrated to Borussia Dortmund.

Alassane Plea and Embolo as well as Herrmann and Ibrahima Traore will fight for the two places in the storm. With Marcus Thuram from the French second league team EA Guingamp there might even be a fifth candidate. Not only in the storm is the final line-up completely open, Rose is testing everywhere and gives all players chances. A stem formation will probably only emerge during the first compulsory games.

In the test against 1860 Herrmann scored the decisive 1:0 – on presentation of his forward partner Plea. When it didn’t go so fast in the following defeat against Augsburg, a fan from the grandstand roared: “There’s the Hecking virus!” And down at the side line, rose gesticulated wildly around. “Hopefully we will quickly internalize what the coach has in mind,” says Jantschke. “I think it could be very, very good.”