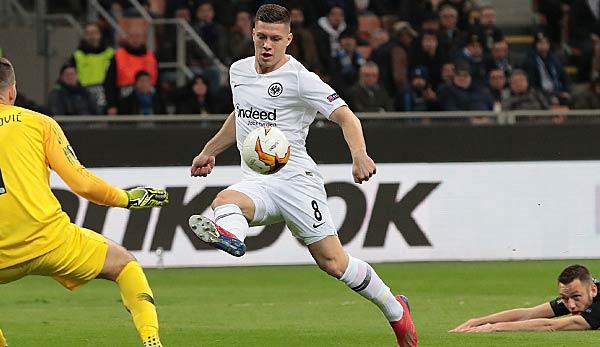 Eintracht Frankfurt plays against Benfica Lisbon in the first leg of the Europa League quarterfinal. Here on SOCCERSCORE you will find all information about the game, as well as the transmission on TV, livestream and live ticker.

You can watch the complete Europa League live and on demand on DAZN. Get your first month for free now.

Eintracht from Frankfurt is the last German representative in international business. With a 1-0 win over Inter Milan, they could play their way into the quarter-finals. In the first leg against Benfica Lisbon, the way for the semi-finals of the Europa League is now to be paved.

In addition to the Europa League, the streaming service also includes the Champions League, Premier League, Serie A, Ligue 1, Primera Division, Darts, Tennis and lots of US sports.

You can use the whole offer for 9,99 Euro per month. You can cancel at any time and see the first four weeks for free during a trial month.

Even without livestream you can keep up to date about the game of the last German club in the international business. Here at SOCCERSCORE there is a live ticker with which you won’t miss anything important.

All quarter finals at a glance:

The Europa League quarter-final first leg between Benfica Lisbon and Eintracht Frankfurt will take place this week on Thursday 11 April at Estádio do Sport Lisboa e Benfica. The return match will take place one week later on Thursday, 18 April, in Frankfurt.

So far, there have been two different kick-off times in the Europa League, at 18:55 and 21:00. For the quarter finals there is now a uniform time for the kick-off whistle. Therefore the game will be kicked off by Eintracht in Lisbon, like all other games, at 21 o’clock.

Among all German participants, Frankfurt is the last remaining club in the quarter-finals of the Europa League. After six wins in the group stage, they could manoeuvre themselves into the round of the last eight against Schachtjor Donezk and Inter Milan.

Benfica vs. Frankfurt live today
We use cookies to ensure that we give you the best experience on our website. If you continue to use this site we will assume that you are happy with it.Ok