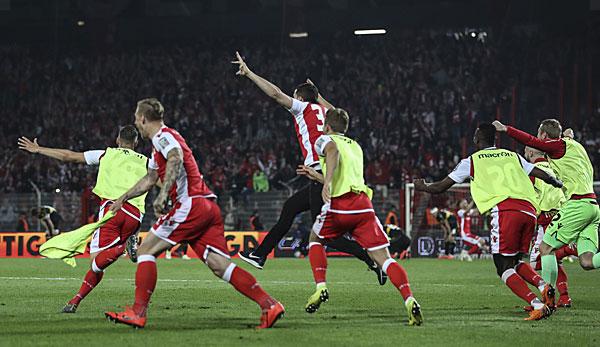 Club President Dirk Zingler was not in the middle of the hustle and bustle at the historic moment of Union Berlin’s rise to the Bundesliga, but on the quiet spot.

He had “not experienced the final whistle”, Zingler revealed, “I was away with my wife, she in the ladies’ toilet and I in the men’s toilet. Then we met before that and then we met …”, the 54-year-old added, making a touch-up gesture with his hands.

Especially for him, for “Mister Union”, who since 2004 has been continuously in charge of the fate of the Ironmen as a powerful president, the first promotion to the highest German league after the 0:0 in the relegation return match against VfB Stuttgart on Monday evening in the home stadium at the Alte Försterei was a huge pleasure.

“Union and first Bundesliga – that sounds strange to me”, Zingler said emotionally visibly taken along: “Although I have been waiting for this day for 40 years, but when it’s time, it sounds totally strange”.

Voices: “Stuttgart was surprised at how things got down to business here.
RBL probably spied on by SGE employees
We use cookies to ensure that we give you the best experience on our website. If you continue to use this site we will assume that you are happy with it.Ok