Gladbach newcomer Thuram: The world champion son for whom Messis shoes were too small 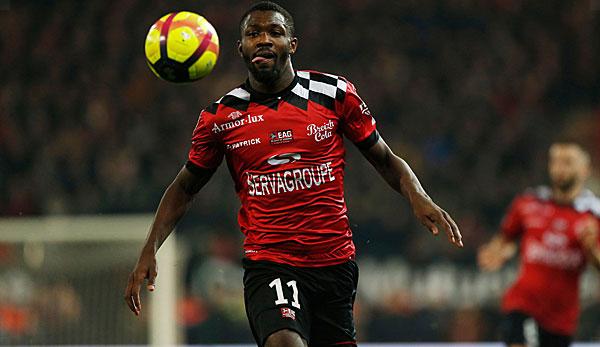 Marcus Thuram is the son of France legend Lilian and he gave a gift from Messi once without further ado. A portrait of the new arrival of Borussia Mönchengladbach.

It must have been sometime in 2007 when Marcus Thuram tried on a pair of soccer shoes. A friend of his father’s had given it to him. But they didn’t fit, too small. So he just gave it to a buddy.

The name of his father’s boyfriend who wanted to give him the kicks: Lionel Messi. “I had no idea at the time, was maybe ten years old,” Thuram laughed later in an interview with AFP. Messi, who was probably 20 at the time and in the process of rising his star, was the teammate of Marcus’ dad Lilian Thuram, who spent the last two years of his active career at FC Barcelona from 2006 to 2008.

Messis’ shoes the buddy to whom he gave them to must still have them, says Marcus Thuram. The 21-year-old has established himself at EA Guingamp in Ligue 1 and has long since played his way into the focus of larger clubs. Borussia Mönchengladbach now got the contract and strengthens his offensive with the French U21 national player.

Behind Thuram’s career to date is a clever plan. Logically, with the father. Lilian became world champion with France in 1998, almost a year after Marcus was born in Parma, where Thuram senior caused a sensation with the AC from 1996 to 2001. In 2000 he won the European Championship title with the Equipe Tricolore, played 140 international games and later kicked with Juventus and Barca.

Thuram, however, always kept his down-to-earth attitude despite all his successes. Not surprisingly, at 15, he did not advise his offspring to go to PSG, but to switch to the tranquil FC Sochaux. “It was my father who recommended that I stay away from all that bling bling,” he said to L’Equipe. “Sochaux is far from everything, there’s not much media attention. It’s like a protective cover.”

Besides, Sochaux, currently the lower mediocre in the second league, is traditionally considered one of the best talent forges in France. Former Barca defender Jeremy Mathieu was trained here, as was former international Jeremy Menez. Wolfsburg’s Jerome Roussillon and Leipzig’s Ibrahima Konate also passed through the Sochaux Academy.

Thuram in Sochaux was also able to gain early experience with the professionals. He made his Ligue 2 debut at the age of 17 and gradually asserted himself. And he put the finishing touches on his higher tasks, established himself in Ligue 1 at the first go after moving to Guingamp two years ago, scoring nine goals last season. Especially when you consider that Guingamp had to relegate at the end, a very good value.

Thuram is very flexible in the offensive, can occupy both wings, but can also act as a central striker. He prefers to come over to the left, and he usually held this position in the past season.

Despite its enormous size (1.92 meters) it is technically very strong, has a good touch, is experienced in dribbling and fast. He likes to pull in from left to right to finish with his strong right foot.

PSG coach Thomas Tuchel even explicitly pointed out Thuram after one of his first games in Ligue 1 with the Parisians against Guingamp: “Ligue 1 is physically a very tough competition with strong players like Marcus Thuram for example. He’s fast, physically strong, can dribble and is good in the air.”

Thuram, whom Gladbach could plan as the second head next to Alassane Plea or backup for him or as successor of Thorgan Hazard on the left wing, has to work on his cold-bloodedness in front of the goal while still working a little. And at that, not to be provoked unnecessarily, past playing time he at least twice saw the red card.

In Germany, his famous surname will certainly be less of a target for provocation than in France. Perhaps that is why Papa Lilian advised him to go to Gladbach – and not to Olympique Marseille, which is also said to have shown strong interest. But then a little more Bling-Bling would have been than the Lower Rhine.

Hinteregger: Strike? “Complete bullshit.”
FC Bayern wins the last test of the US tour against Milan with a commanding victory
We use cookies to ensure that we give you the best experience on our website. If you continue to use this site we will assume that you are happy with it.Ok