Player of the Year: For this star van Dijk voted 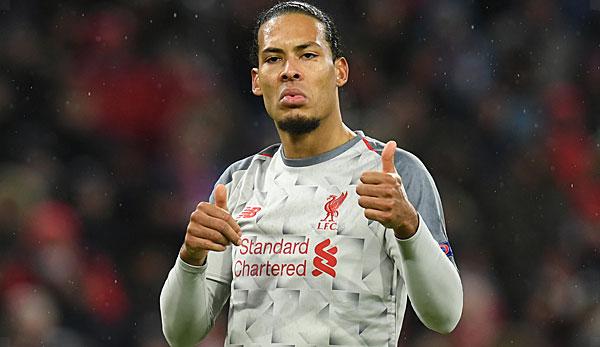 Liverpool defensive player Virgil von Dijk sees Manchester City’s Raheem Sterling at the top of the ‘Player of the Year’ list and has therefore given the Englishman his vote.

In an interview with FourFourTwo, the Dutch national player admitted that he was enthusiastic about the class of the Citizens’ wingman: “I voted for Raheem Sterling. I did it because I think it’s right and he just deserved it.”

Van Dijk is one of Sterling’s favourites for the ‘Players of the Year’ title, but deliberately decided not to give another player his vote to increase his own chances.

“He played a fantastic last season. Of course, I could have voted for Bernardo Silva or another player from City, but I’m just being honest. I think he’s evolved a lot,” continued the Reds defender, who will have to compete with his team against FC Porto in the Champions League on Tuesday evening.

Despite his admiration for Sterling, van Dijk himself would be honoured by such an award. “Of course I’d be proud, you have to be proud too. But all the hard work in the training sessions we did as a team. It is important to win titles as a team, to win collectively. Hopefully this will also become reality,” said the 27-year-old central defender.

In the Premier League, FC Liverpool are two points ahead of Sterlings Skyblues in second place, but have one more game to play. “We must continue to fight until the end. Individual awards are on the horizon,” concludes the Reds’ defensive chief.

For van Dijk himself, this is the second season in the Reds’ jersey. In January 2018, he was transferred from FC Southampton to Anfield Stadium for around 85 million euros (transfermarkt.de). Since then he has been on the field 62 times for Jürgen Klopp’s team. His record: five hits and three assists.

Rose looks forward to career end
Sadio Mane would cost Real Madrid 150 million euros
We use cookies to ensure that we give you the best experience on our website. If you continue to use this site we will assume that you are happy with it.Ok