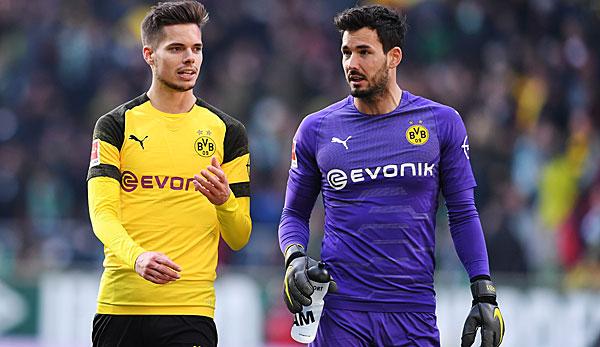 Roman Bürki will probably be available to the BVB for the season finale against Borussia Mönchengladbach (Sat., 15.30 o’clock in the LIVETICKER). Abdou Diallo, on the other hand, will be cancelled.

Bürki suffered a slight muscular injury on the back of his thighs, Lucien Favre said at the press conference on Thursday. But he would still be there on Saturday, the coach assured.

Bürki had cancelled the team training on Thursday – a precautionary measure. Favre described Abdou Diallo’s injury as “severe”, and the defender also had muscular problems. I guess he won’t be able to play this weekend.

Regardless of the staff situation, Favre wants to see his team play a top match: “We have to prepare for any eventuality. Press very high, but also wait a little. Gladbach has played a very good season and are dangerous especially with counterattacks.”

Sports director Michael Zorc hopes that a lead against Gladbach will put FC Bayern under pressure in the long-distance duel: “That would trigger something. But of course, FC Bayern is in pole position.”

Nobody in Dortmund is excited (yet). “We’re proud to be part of this. We’re really looking forward to the game. The tension will of course rise on Saturday morning when we drive to the stadium. These are beautiful moments,” said Zorc.