Bundesliga, 2. league, 3. league: broadcasting of the relegation 2019 on Free TV? 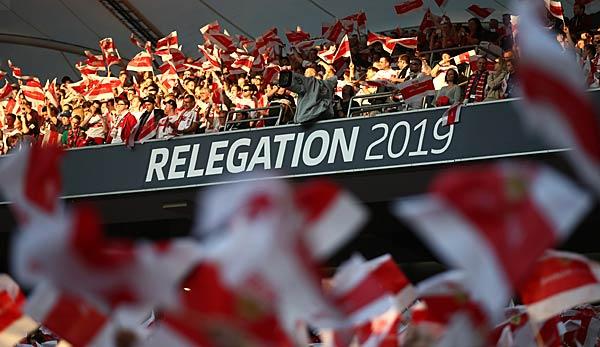 The three relegation matches in leagues one, two and three are on the programme. Apart from one match, all the second legs will be broadcast live on free TV. SOCCERSCORE tells you which games will be shown live on Free TV.

Get your free DAZN month now and enjoy all the highlights of the relegation rematch Union Berlin – VfB Stuttgart shortly after the final whistle on DAZN.

The first return leg of this year’s relegation will take place on Sunday. In the late afternoon, the two reserve teams of FC Bayern and VfL Wolfsburg face each other in Munich. FC Bayern II will have to make up for a two-goal deficit in the first leg.

Already on Monday, the relegation return match between Union and VfB Stuttgart will take place. While the Berliners are fighting for the first Bundesliga promotion in the history of the club, the Swabians are concerned with maintaining their class.

In the last deciding match, on Tuesday, a second league team will face off against a third league team.

There will be no free TV broadcast from the 2019 Bundesliga delegation. This is exclusively and thus exclusively transmitted by Eurosport.

Eurosport shows the game on Pay-TV on Eurosport 2 HD Xtra. On the other hand, the game can be seen live and in full length in the stream via Eurosport Player.

In contrast to the Bundesliga delegation, which is shown exclusively by Eurosport, the second and third league relegation matches are broadcast on free-to-air television.

Live images are provided by two public TV stations. The second league delegation will be broadcast on ZDF, while the promotion match of the 3rd league will be shown live on BR.

Both above mentioned live-meetings will of course also be available via livestream.

The duel between the two regional league teams FC Bayern II and VfL Wolfsburg II will be broadcast live on MagentaSport.de and in the BR live stream.

The second league delegation, i.e. the game Ingolstadt – Wehen Wiesbaden, will be accompanied live and in full length by the public ZDF live stream. In addition, Eurosport offers a paid livestream via the Eurosport Player.