Boateng admonishes Davies: “You can still expect a lot” 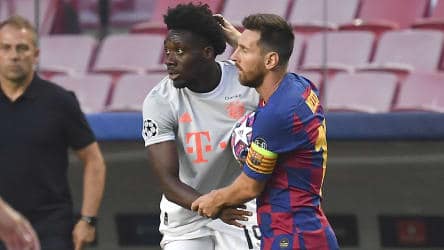 Alphonso Davies passed his master’s exam against Lionel Messi. He is an integral part of the functioning Bavarian team – Jerome Boateng also flourishes.

The solo before 5-2 against FC Barcelona impressed colleagues themselves. When Alphonso Davies punched out half the Barça defence in the Champions League quarter-final (8:2) and then served Joshua Kimmich in the five-metre room, it wasn’t just the goalscorer who burned her memory. “Wow,” Jerome Boateng also says as he praises his fellow player this Sunday.

“There isn’t often such a talented boy,” the defending champion enthuses in the highest tones. “A player who explodes like this and has found his position like this. There’s so much potential in there. You can still expect a lot, he gets much better.” It’s a pleasure to watch the youngster develop.